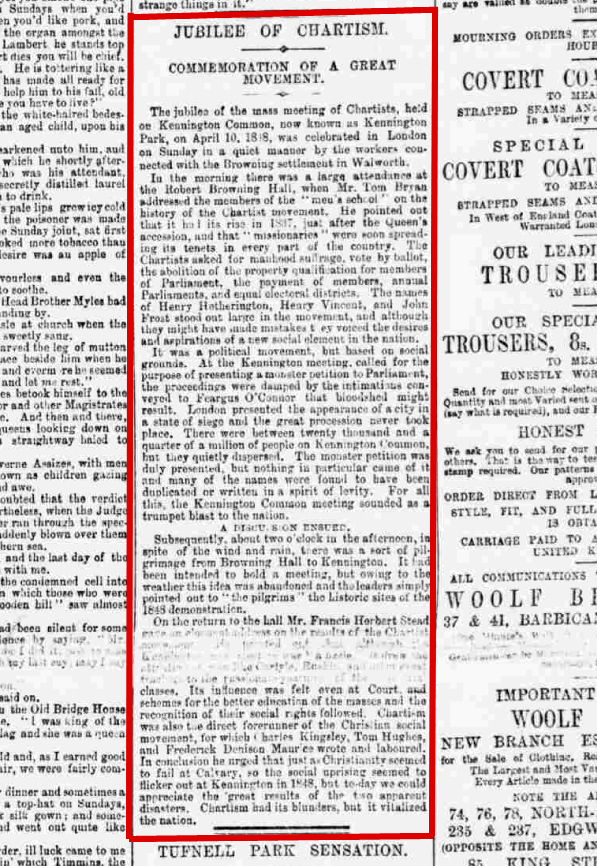 A clipping from 17th April 1898, when residents of Walworth marked the 50th anniversary of the 1848 rally, by holding a meeting and making a short pilgrimage to Kennington Park. The extract comes from Reynolds News and its founder Mr Reynolds was present on 10 April 1848.

“The Jubilee of the mass meeting of Chartists held on Kennington Common, now known as Kennington Park, on 10 April 1848, was celebrated in London on Sunday [Easter Sunday] in a quiet manner by the workers connected with the Browning settlement in Walworth. In the morning there was a large attendance at the Robert Browning Hall.”

…“The Kennington Common meeting sounded as a trumpet blast to the nation”….

“About 2 o’clock in the afternoon, in spite of the wind and rain, there was a sort of pilgrimage from Browning Hall to Kennington. It had been intended to hold a meeting, but owing to the weather this idea was abandoned and the leaders simply pointed out to “the pilgrims” the historic sites of the 1848 demonstration.”

“…Chartism had its blunders, but it vitalized the nation”