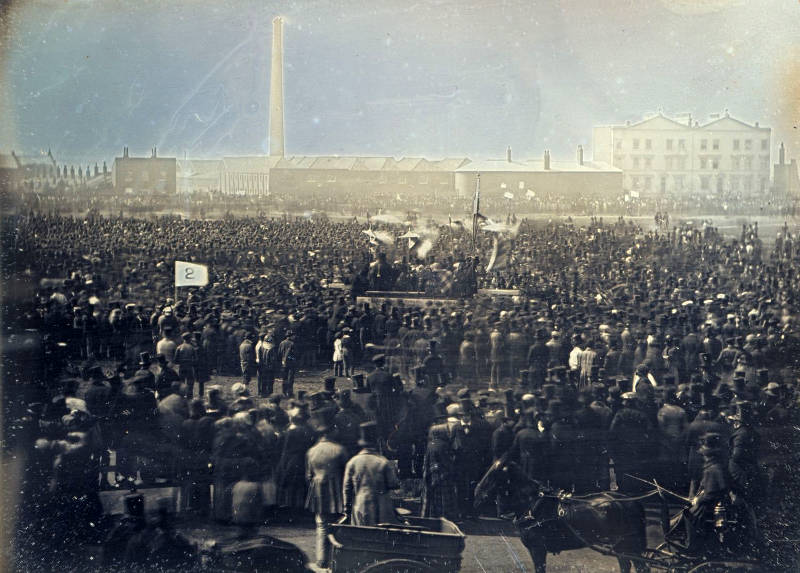 A very early ‘Daguerreotype’ photograph showing the great 1848 Chartist Rally on Kennington Common. The incredible detail in the image shows an orderly crowd, including women and children, facing towards the wheeled carts serving as speakers platforms. Banners and numbered flags are visible, showing muster points for divisions of London Chartists, and in the distance, the tall chimneys of the Vitreol factory, now the site of Agnes Church. More crowds are gathered around buildings over the far side of the common (towards what is now St Agnes Place, and Brandon Estate) where they were addresses by speakers from upper floor balconies.

Calculations by Dave Steele and others have shown that the image was most likely taken from the upper balcony of the Horns Tavern (now the job centre, corner of Kennington Rd and Kennington Park Rd).

A daguerreotype is an early form of photographic process using a polished sheet of silver-plated copper, treated with fumes, and exposed to the light. William Kilburn was a society portrait photographer who photographed among others, the royal family.  This is thought to be the first photographic images of a crowd, and some have argued the first example of a police surveillance, as it is thought likely that Kilburn was commissioned by the authorities to record the rally in case evidence were needed of how events unfolded.

The image plates were bought by Prince Albert, who was likely motivated by both his interest in photography and his position as President of the Society for Improving the Conditions of the Labouring Classes. This is one of two plates taken on that day that are held in the Royal Collection at Windsor. One of the plates must have been the source for the famous engraving of the rally that was circulated widely and published by the Illustrated London News and other newspapers.

Nicholas Mirzoeff in his essay ‘The visual commons: counter-power in photography from slavery to Occupy Wall Street,  (Included in Image Operations: Visual Media and Political Conflict, Oxford University Press, 2017) writes: “The Chartist Movement arose alongside photography….This is moment of transition from one means of production to the next (in this case, from colonial feudalism to imperial capitalism). Here, too, is a new means of visual production: the daguerreotype, with the radical, democratic potential to make visual memory common.”