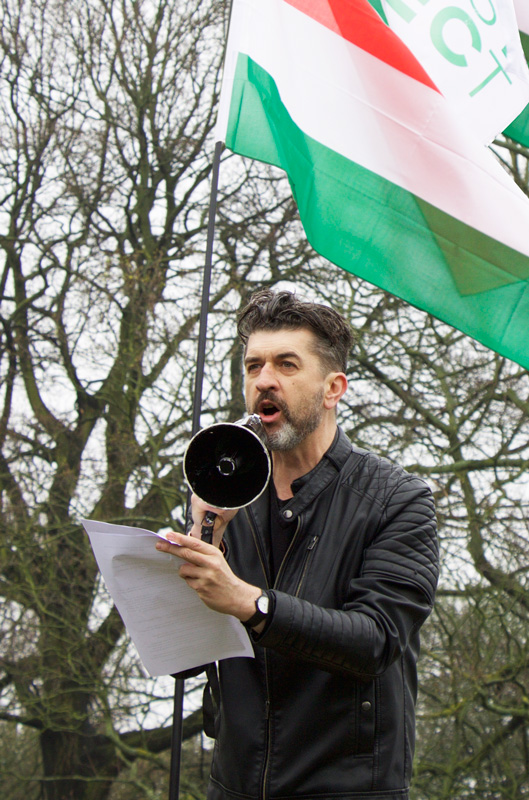 Tom Collins, 1967 – 2019, the voice of Feargus O’Connor for the Kennington Chartist Project.

Tom performed Feargus O’Connor’s famous 1848 speech at the Kennington Chartist project launch in 2018, and again for Chartism Day in June 2018. Sound clips and video of his delivery have featured as an evocation of the Kennington 1848 rally in recent lectures on Chartism.

Tom had first become inspired by the Chartist story some years earlier after hearing Stefan Szczelkun speak about the Kennington rally. Tom liked to tell the story that following that epiphany he developed a solo performance piece based on the story and performed it to an audience of one – (or was it none?) in Kennington Park. Or did he perform it on the bus? He didn’t care about the size of the audience or the recognition, what was important was the urgency and conviction of the impulse to action.

So when Tom got in touch to say he wanted to get involved in our project, he had a very clear idea of how he wanted to contribute, and his brilliantly acerbic energy brought something special. While much of our focus was on the Chartist leader William Cuffay – Tom urged that Feargus O’Connor was also a subject worthy of re-examination. He was fascinated by the character of O’Connor, with whom he identified – his Irish heritage, and later mental health issues. He was convinced O’Connor had been unfairly portrayed by history. There were discussions on developing a stage play on the rivalry between the two Chartist leaders William Cuffay and Feargus O’Connor.

The upcoming Kennington 1848 publication will be dedicated to the memory of Tom.

“Go on, conquering and to conquer, until the People’s Charter has gloriously become the law of the land!”